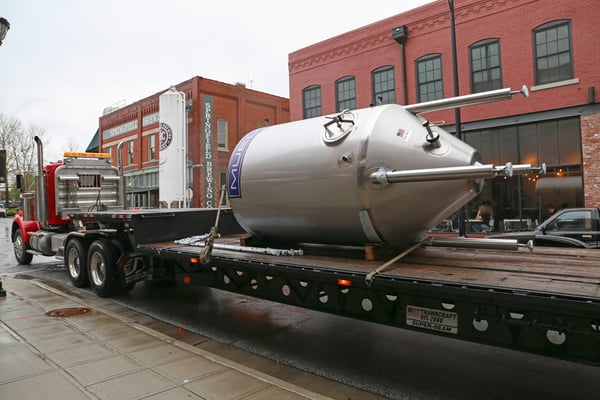 The nearly 1,000-gallon tanks are expected to triple the company’s brewing capacity.

SBC Managing Partner Bryan Bevel said the last of the new tanks arrived this morning and should be operational in about two weeks.

“It actually changes our footprint because we sell about 1,200 barrels of beer per year in-house and about 800 in distribution. Now, we’ll be able to sell about 5,000 barrels in distribution,” Bevel said, noting a barrel is equal to 31 gallons of beer.

The new tanks were purchased from Paul Mueller Co. (OTC: MUEL) for an undisclosed price. Bevel said the equipment addition is part of facility upgrades in the connected building to the west on McDaniel Street, which the company purchased from one of its business partners.

Bevel said a brewer from Colorado has been hired to help manage the new capacity, and the owners also are looking to hire another this year and one more in 2017 under head brewmaster Ashton Lewis.

SBC’s growth mirrors an industry upswing in total breweries over the past decade. Between 2006 and 2014, the number of breweries in the U.S. grew to 3,464 from 1,460, according to the Brewers Association. During that same time, microbreweries expanded fivefold to 1,871.

In 2011, Bevel was among a group of six investors to purchase SBC from Mueller Co. for $3 million. The company has operated as a restaurant, brewery and showcase for Mueller Co.’s stainless steel brewery tanks since it opened on Market Avenue in 1997.

Consult With Our Experts